The Lost Art of Proactive Calling in the Sales Profession

This is an excerpt from my new book, Pick Up The Phone & Sell, which published on Wednesday. It is the full text of Chapter 1. As I send you this, there are now 23 reviews posted on Amazon. They are from salespeople, managers, executives and business owners. Go take a look at what your peers are saying, and see if the book is for you.

The Lost Art of Proactive Calling in the Sales Profession

This is the most obvious book I’ve ever written.

You’re reading my fifth book on sales growth, but none has been as clearly necessary and important to write as this one. Especially now, in a post-pandemic world, where we cannot see our customers nearly as much as we previously could.

In the selling profession, only the phone is so universally understood to be the key to success and, at the same time, so widely avoided. And by a surprisingly large number of salespeople, it is even dreaded.

In the 1980s and so many of the decades that came before, if you wanted to sit in your office and communicate with a lot of people quickly, the only option you had was the wired landline telephone. 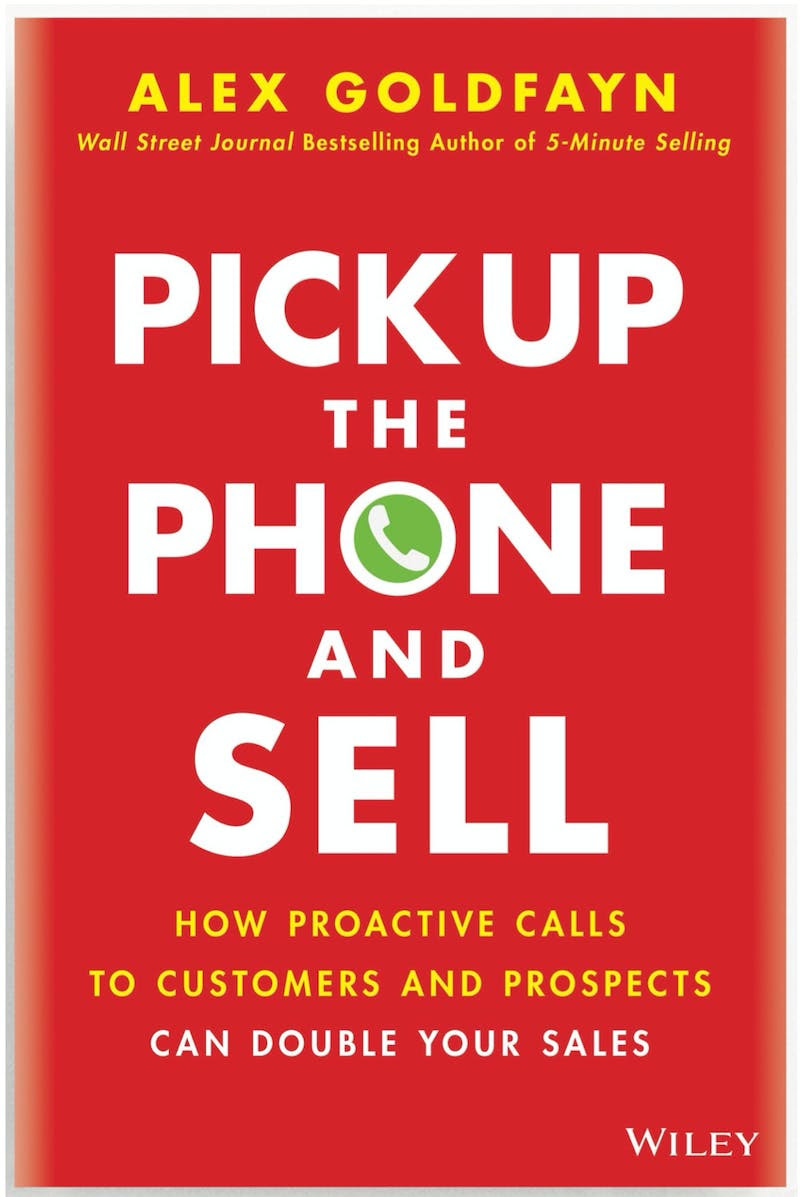 So a lot of salespeople had no choice but to be really good at using the phone.

And, over time, many of us moved to email as our preferred method of communicating with customers and prospects.

Then we got cell phones.

And then social media rolled in:

All of these things were also faster, easier, and far less threatening than the phone.

So we went to them.

Because on these platforms, rejection is usually simply silence, whereas on the phone, it’s intimate and personal and spoken directly into our ears.

Of course, we still have meetings, and we’re good at them because we never really stopped having them.

But how many meetings can you have in a day? About as many as an hour’s worth of phone conversations.

And so, over the last few “Internet decades,” the entire sales profession has moved away from what so many used to excel at: proactive phone calls to customers and prospects.

Communicating by phone with customers and prospects when nothing is wrong.

I run a large solo consulting practice, working with business-to-business organizations to grow their sales. My clients average 15–30% in additional new sales growth annually directly from our work together. Even large companies, in mature industries. Even companies that have been stagnant and have not added significantly to their sales in years. Even these companies add 15–30% in new sales.

Individually, many salespeople double and sometimes even triple their sales when applying the techniques I teach them – techniques I lay out in this book.

How would doubling your sales numbers improve your life?

Or maybe “only” increasing them by 50% … what would that do for you and your family?

How do my client salespeople achieve this kind of growth?

Centrally, with the phone.

By letting customers and prospects hear from them proactively.

By demonstrating that they care.

Almost entirely with the phone.

Before the pandemic, I did 75 to 100 speeches and workshops each year focused on my techniques for sales growth.

When the pandemic besieged us, I continued doing live sessions virtually, but because salespeople couldn’t see their customers any more, I doubled down on how to use the phone to grow sales.

Many of these sessions were in multiple parts – often a series of three, with the same audience each time.

By the third webinar, after spending at least two hours exploring the ins and outs of telephone selling, I would ask the attendees what they’d like me to focus on. I like to go where my audiences want me to go.

I would even give options:

Do you want to talk about selling more to existing customers?

Or asking for referrals?

Or following up on quotes or proposals?

What about asking for the business?

Or do you want me to go over phone selling some more? (Keep in mind, this was the dominant topic of the previous two sessions these same people had attended.)

Via the chat function, people made their requests. The vast majority of topics salespeople wanted to cover centered on selling over the phone:

When should we call?

Who should we call?

What if we don’t have the customer’s cell phone number?

Do I leave a voice message?

How many times should I try before giving up?

And then, inevitably, these kinds of comments would be raised:

I don’t like selling on the phone, but I know I need to.

I hate getting cold calls.

I don’t have time to call people.

Nobody returns my calls anyway.

These questions and comments illustrate the obvious: there is a hunger for instruction on how to sell with the phone. And there is discomfort about doing it.

We’ve gotten away from using the phone as a selling tool, but innately, we know how useful and effective it can be.

To complicate matters, there is a dearth of resources on this topic.

Search for books about social media selling, and you’ll fund hundreds of them –and thousands of blogs and podcasts, and tens of thousands of “experts” on the subject. (Ironic, since business-to-business selling success over social media is extremely challenging to come by.)

But try to find a recent book on phone selling, and you will have very few choices.

In fact, you can count on one hand the phone-selling books that have been written in the last decade.

And not one of them looks at selling with the phone in combination with the digital tools at our disposal: virtual meeting tools like Zoom, text messaging, email, and, yes, social media like LinkedIn.

Want to look for a blog or podcast about phone selling? When I Google “phone selling,” I get “selling old cell phones for cash.”

So, I wrote Pick Up the Phone and Sell.

My goal is to arm you with a quick and simple guide for attaining significant sales growth by proactively calling your customers and prospects.

Get good at using the phone, and you will be in rare air in the sales profession.

Because the great majority of salespeople are not very good at using the phone.

I’d say 90% of salespeople are reactive in our work.

We’re very good at answering the phone and solving problems.

But not many of us regularly pick up the phone to call customers and prospects proactively when nothing is wrong.

This is where relationships are built.

This is where trust is formed.

This is where you get to help your customers and expand your business with them.

This is where the money is made.

The rare salesperson who regularly and systematically makes proactive calls gets to stack these successes one on top of the other, with customer after customer.

Among my clients, the salespeople who most often proactively call customers and prospects are the most successful salespeople in their organizations.

Ninety percent of salespeople are reactive and don’t call.

Want to launch yourself instantly into the top 10% of all salespeople?

Follow the approaches you’re about to read, and leverage the power of proactive calls.

There’s a book for that now!

You can buy the book on Amazon here.